A Tale of Two Physicians

This blog post was originally published on March 28, 2017 on our previous blog website, financialclarityblog.com and has since been revised and updated.

As a financial advisor, I have the privilege of getting an in-depth look at people’s finances.  And let me tell you, you can’t judge a book by its cover.  Some very smart people with high incomes are drowning in debt.  Others with modest incomes are multi-millionaires.

Let’s look at two examples of fictional physicians (I work with a lot of physicians and they probably make up the majority of the reader base for this blog, so it will be relevant) to see how finances can differ drastically between two similar people.   We’ll call them Steve and Pete.  Let’s take a look at Steve first.

Steve is an anesthesiologist making $350,000/year.  His wife, Sally, stays at home to take care of their two children, ages nine and seven.  Both kids are in public school.  Steve is 41 and Sally is 39.

They live in a nice neighborhood, in a good school district, in a decent four bedroom, two and a half bathroom house.  Steve saved aggressively in his first few years out of residency so they could put a 20% down payment on their house (purchased for $500,000 six years ago) and their monthly payments including taxes and insurance amount to $2,600/month.

His student loans are down to $50,000 and at his $2,000/month payment, those should be paid off in under three years.  Like most families they have the usual expenses for food, utilities, kids’ activities, etc.  They like to take one or two family vacations per year – one to visit extended family and another “fun” vacation.

They don’t have any car payments – both cars are in good shape and they plan on driving them for at least another few years.  Steve mows the lawn himself, Sally does the majority of the housework.

In their free-time (which is harder and harder to find these days!) they enjoy the occasional date night without the children, hiking, biking, photography, and trying to make new recipes in the kitchen.

In addition to maxing out his 401k at work, they try to invest as much as they can for retirement and college for the kids.

Pete is also an anesthesiologist making $350,000/year.  His wife, Paula, also stays at home to take care of their kids and get chores done around the house.  Pete is 39, Paula is 36.  They also have two children, ages eight and five.  The older one is in private elementary school at $18,000/year.  In another year, they would also like to enroll the younger child in the same school.

Pete and Paula purchased their home shortly after Pete finished his fellowship six years ago and used a physician loan to purchase their home for zero percent down.  It is a 4 bed + bonus room & office, 3 bath in a nice neighborhood and cost $700,000 at the time.  Current monthly payments including taxes and insurance are $4,300/month.  They have a landscaper and a house cleaner that both come once per week and amount to $200/week combined.

They like to take one or two vacations with the family each year.  Pete and Paula also enjoy traveling and will take one international trip per year without the kids.

They are a member of several wine clubs and enjoy their weekly date night.  They also go out to eat once per week with the whole family.  Pete enjoys golfing when he can find the time.  Paula is a member of a local tennis club.

Pete maxes out his 401k every year, but that is about it for retirement savings at the moment.  Their goal is to try to save more as Pete’s income (hopefully) rises and when the kids are a little older (they are planning to send their kids to public high school).

Below is a more detailed comparison of the monthly spending between the two families. 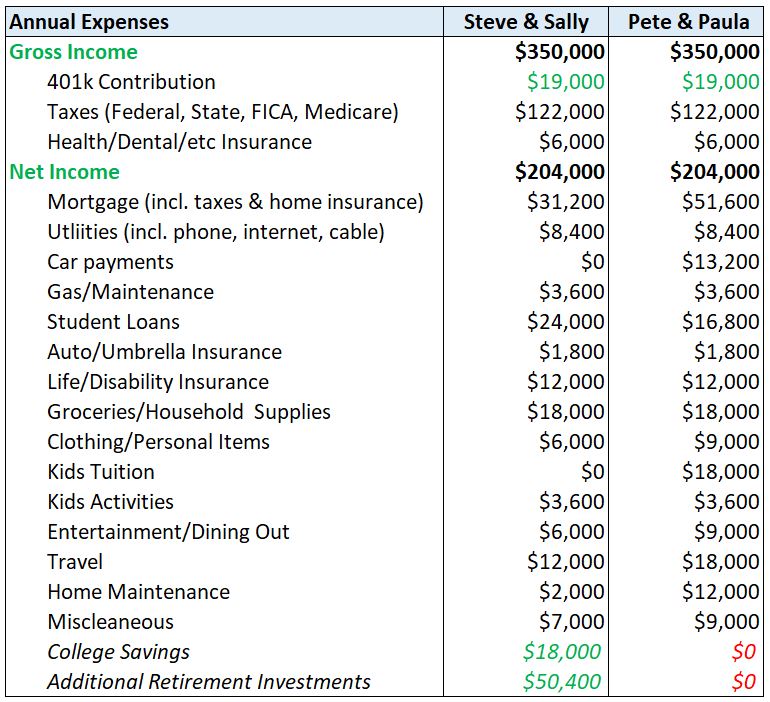 When looking at their monthly expenditures, it’s not as if Steve and Sally are living like hermits, nor does it appear that Pete and Paula are spending like there is no tomorrow.  Obviously, the larger mortgage payment, car payments, and school tuition are big expenses on Pete and Paula’s plate that Steve and Sally don’t incur.  But aside from that, their lifestyle isn’t much more lavish.  Yes, Pete and Paula may take an extra vacation and spend a little more on fun and shopping, but they are paying less on their student loans than Steve and Sally.

The purpose of this is to illustrate how it is pretty easy to adjust your lifestyle around your income and it will be hard to scale the expenses back down once you are accustomed to living a certain way.  Pete and Paula could sell the house and downsize, but since they purchased their home (at a great price six years ago), after the economy and housing markets have surged recently, a smaller house or a less desirable neighborhood would probably result in the same monthly payment!  They could move their oldest child to public school, but do they really want to sacrifice a quality education for their children?  Once the cars are paid off, that will help, but they will eventually need new cars.  They could travel less and have less fun, but what’s the point of living and working so hard if you aren’t enjoying yourself?

Steve and Sally are currently saving $68,400/year for retirement (about 19% of their gross income).  And that doesn’t include any employer retirement contributions.  A couple of things happen when you save that much:

Once the student loans are paid off, let’s assume all the other expenses will stay the same.  Yes, the mortgage will be paid off eventually, but they might purchase a new house, or get a vacation home.  The kids will be out of the house one day, but those expenses could be replaced with more fun, travel, charitable donations, etc.

Not counting student loans (which will be gone eventually) Steve and Sally have annual expenses totaling $111,600, or $9,300/month.  On a before tax basis, they will need about $15,000 per month, or $180,000/year in today dollars to sustain that lifestyle in retirement (maybe less, depending on what taxes are like).

Pete and Paula have annual expenses totaling $169,200 (excluding student loans and school tuition).  In order to sustain that lifestyle in retirement, they will need about $280,000/year before taxes.

We don’t need to run detailed retirement projections to see what’s going on here.  Based on the lifestyle Steve and Sally are living and the amount they are investing, there is a good chance they will be able to retire at a reasonable age and be able to sustain that lifestyle throughout retirement.  They are also socking away a good amount for college for their children and should be able to cover the majority of those costs as well.

Pete and Paula, on the other hand, have a more expensive lifestyle, which would require them to invest a larger amount than Steve and Sally in order to be able to retire one day and sustain that lifestyle.  The fact that they aren’t investing anything beyond the 401k at work only compounds the issue.  Paying for their kids to go to college could be challenging as well.

I see this happen all too often.  People adapt their lifestyle to meet their income before making long-term investing a priority.  Once they get the nice house and the cars and become accustomed to living a certain way, it becomes increasingly difficult to scale down to make room for long-term savings.

We can’t rely on our employers or the government to support us in retirement.  The days of pension plans that pay us for life are long gone.  We have to make saving for ourselves a priority and treat it like a regular monthly bill in our budget.  Otherwise, we will be faced with working longer than we hoped and/or taking a major pay cut to make ends meet as we wind down our careers and transition into retirement.